Give me a break.

As Bruno Mars song goes, “Today I don't feel like doing anything”. The last few days, the dreadful Manchester, Ashton and trouble at Marple have worn me down and I can't be bothered about today.

I did the usual, took Buster for his early morning walk and as far as I was concerned that was it for me today. Corinne had other ideas and around 11:00 she was saying come on lets go.

Oh well looks like I am doing something after all.

We set off and I actually started to feel a bit more with life again, I have found with the Peak Forest Canal you don't moor where you want, you moor where it lets you, very shallow everywhere and full of hidden stones, I couldn't be arsed with the hassle involved in finding a mooring again so we agreed we would try and get to Bugsworth.

We passed Del Boys boat, that cheered me up slightly. 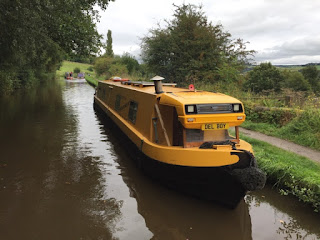 Then the battery warning light started flashing and the beeping started, I hate that beeping. The batteries weren't getting charged. We have had this trouble on and off for a while now, the engineer we had look at it a few months ago said it was the fan belt slipping but I think it's more than that. We stopped, not moored, Corinne held the centre rope while I quickly tightened the fan belt, it was a little lose but not bad. Still no charge was getting to the batteries, I'm thinking a couple of days in Bugsworth with no power, so we called in at New Mills marina to see if they had someone who could look at the problem for us, they were shut for lunch until 14:45, we went back to the boat for something to eat. Googled and phoned a couple of the local boat engineers with no answer. Sod it lets go go go. Guess what, not a peep everything was working fine again, typical.

I forgot to say the smell of the sweet factory as we passed was very nice indeed. 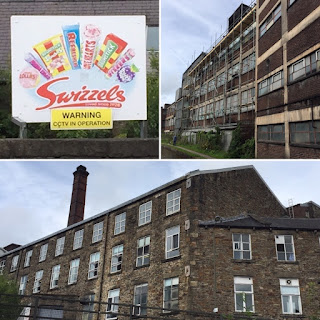 We made it to Bugsworth, pretty busy but we managed to turn around and squeezed in on the middle basin, it wasn't until later we found out there was a top basin that had lots more room, never mind I like it where we are. 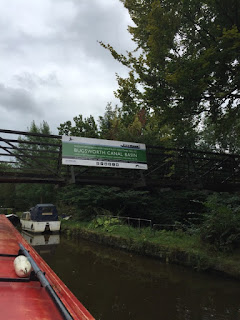 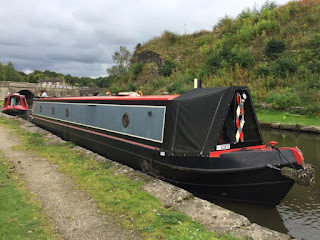 Buster hadn't had a proper walk today, it was four-ish so we planned to take a walk into Whaley Bridge to look for a Fish & Chip shop, it didn't open until 5:00 so we bought a coffee from the cafe further along the row of shops and sat on the bench outside watching things go by, one of my favourite things to do. 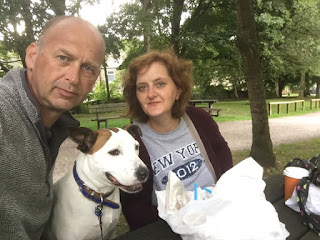 All three of us had fish, chips, mushy peas and coffee at some picnic table on the way back, turned out to be very popular all the tables soon filled up with people doing the same.

Ended up being a good day after all.
Posted by Mark and Corinne at 23:20