An early ish start as we wanted to get to Manchester and Castlefields Basin today, we had rain showers around mid-morning but nothing too bad. We called in at Broadheath Retail Park as usual to get some groceries from Aldi.

Off again after lunch and straight through to Manchester yet more housing getting built, this time around the old Linotype Works with the facades of some old buildings, I would like to think they will be getting incorporated into the new structures somehow. 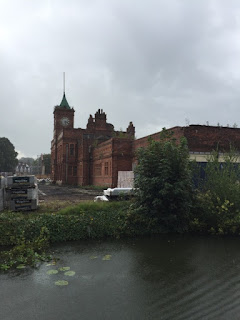 The approach into Manchester is changing, lots of new office blocks going up along the canal front. As you get closer to the basin things haven't changed. 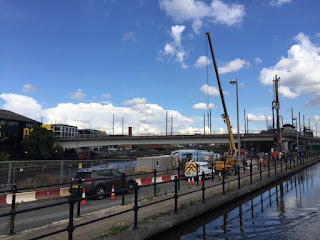 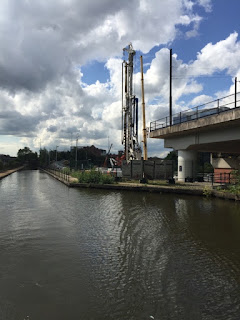 One thing of importance if you're an Elsan user, there isn't one. Looks like the one that was on Potato Wharf has broken and according to the notice won't be replaced. This I think will dissuade a lot of potential visitors. We won't be coming back in a hurry.

We moored just back from the end of the arm. Sat down with a coffee when the heavens opened with a very heavy downpour and thunder and lightening. 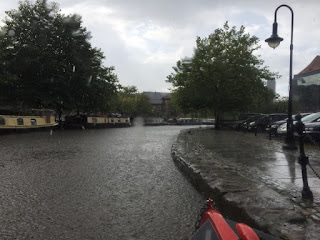 Later after eating we went out again, nothing has changed. But the weather was again lovely, Mr B wasn't impressed about the lack of grass.
Posted by Mark and Corinne at 21:23