We set off mid-morning for our booked visit to The Gauntlet Centre in Knutsford Cheshire. The weather was dry even if a bit windy, we arrived bang on time.

The bird handler started Corinne of with the small birds first, Oliver was a lovely tame owl that loved to have his head stroked. He didn't fly today. 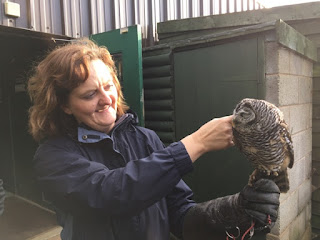 Next was Eric, it was a bit windy for him and he was reluctant to fly for us.
Ronnie, Corinnes favourite was big, and responded well for treats.
Ronnie swooping in for its food.

Terry also flew well and wasn't bothered by the wind.
Marks favourite was the Harris hawk. Slick was more interested in other things to start with but soon performed well when he realised where the food was best.

No, we didn't get to fly the bald eagle but he looked magnificent on his perch.

We arrived in Nantwich late morning on Thursday passing Debbie and James moored up on Nb Lois Jane, Debbie was outside and we said we would call around later, our water situation was desperate the gauge had read zero for at least last day now.
After filling up we passed under the bridge and spotted a 24hr mooring just the right size for us. It was now lunch time so we called in at Waterside Cafe just in time before it poured down, so glad that it had a covered seating area, we had a toasted sandwich and cup of coffee, Buster got the corners. 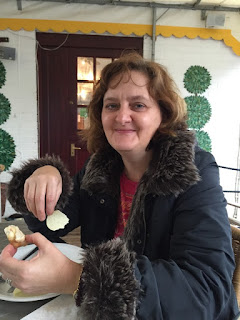 We dropped Buster back off at the boat. His first time left on his own in the boat, what would we come back too?
It was a short walk to visit James, Debbie and Dudley, we had a lovely afternoon. Mark got to chat to James about his pens, and a look at the finished products, superb workmanship made from excellent materials, and a choice of beautifully made pen sleeves.

We got back to the boat and peeped through the window, Buster was fast asleep on the settee, he had even eaten is food so can't have minded being left alone.

We ordered a Chinese takeaway for dinner and walked into Nantwich to collect it, on the way a firework went off,  I suddenly realised it was bonfire night poor Buster. We collected the takeaway and were back to the boat before he'd notice any bangs.

Friday Debbie and James accepted our invitation to come around to visit us and meet Buster (The little Monster) another lovely morning.

We set off early afternoon and were moored up at the top of Hurleston locks within two hours.

In the afternoon we walked to Snugburys Ice-cream and sampled some of their ice-cream, it started to rain on the way back and we got soaked, first time this week so we hadn't done bad. 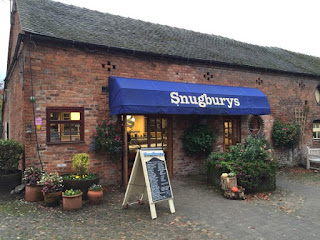 Not exactly sure where we've stopped today, could be Baddington, its somewhere between Hack Green and Nantwich.

Before setting off this morning we took a walk up to the Mill for a look around, Corinne bought the book Narrow Dog To Carcassonne, Mark has read Narrow Dog To Wigan Pier in the past, and I have see Terry on TV with excerpts from this book. 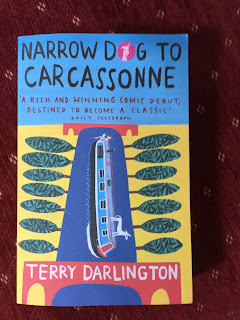 We left Audlem around 11.00am and travelled about two hours just passed Hack Green locks.
Buster met a couple from a boat coming up the locks just as we were about to go down, luckily they liked dogs or did until they met Buster, lol. he can be a bit over fussy and loves to say hello but will insist on jumping up.
We pulled over at the first suitable spot where the towpath didn't have a horrible ledge below the water line.

On route, Corinne did some cleaning and made a nice Maderia and some corn beef hash for lunch. 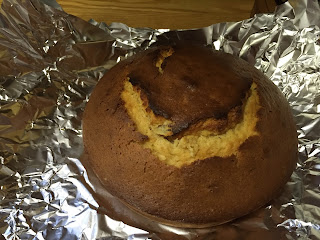 Nothing for it now but to sit back and watch people pass by.
Posted by Mark and Corinne at 14:48 No comments:

Just a short trip today from Coole Pilate to Audlem about an hours trip. very quiet, probably four or five boats passed us all day. At Audlem a large section of moorings had been set aside for permit holders (winter moorers) all empty but meaning we had a long walk into the village.

We decided on a chippy tea, checking the opening times on line we set off, oh no cash, better call at the hole-in-the-wall on the way, damn machine out of order! I know we can get something from the co-op and get some cashback, sorted. As we approach, the chip shop looks dark is it open? No! but the times, black tape had been struck through Monday, stupid shop. Lets take Buster for his run on the park with his tennis balls.

On the walk back we decided to call in at the pub for a drink and something to eat, walking straight past the Shroppie Fly and into a friendly pub our fav The Bridge Inn. We both had steak and ale pie chips and peas and Buster had Corinnes' leftover pie crust. This was Busters' first visit to a pub and he was a good boy, turned out an ok day, now back to the boat for a well deserved snooze in front of the fire.

Mark’s taken a week off work for some rest and relaxation so we have come to spend it on D.O.G, Fridays stay was in the marina, next morning Mark fitted a new fan belt as the last one had snapped just as we entered the marina on our last trip out. I filled the water tank and off we went to get some diesel, setting off toward Hurleston it was a nice quiet trip with hardly any other boats moving,

Our first night was at Nantwich, opposite the fair! oh dear. It turned out it wasn't that bad really but Buster wasn't impressed with all the bangs and fireworks. All the noise had stopped by 22.00 but Corinne was complaining at breakfast that she couldn't get off to sleep last night because of all the bangs and clanks until after 01.00. Mark never heard a thing.

This morning Buster woke Mark around 08.30 for his walkies, he wouldn't go out last night due to the fireworks so he must have been desperate. We lazed around and caught up on all the news, blogs and tweets, it was around 11.00 before we set off. A foggy morning that turned out to stay with us all day. As we left Nantwich we passed James and Debbie on Nb-Lois-Jane, it was at an awkward spot just before a bridge and moored boats so we couldn't stop and chat, hopefully next time, would love to see your turned pens James. Im a bit of a wood-turner myself. i.e. Mark.


Now at Coole Pilate, so quiet compared to last night but then again anywhere would be, Buster managed to find some horrible smelly stuff on the grass bank and rolled in it (Poo) he needed a wash down before he was allowed back on-board.


Forgot to say, we got some headphones for our walkie talkies before the trip and this was the first time we used them, they work great so handset can now stay in the pockets while we chat.

Four years ago today we collected Nb Dee O Ghee from Lymm Marina as a sail-away . Two years we spent fitting her out at Hesford Marine on one of their hard standings at weekends, holidays and evenings, now we are entering into our third year of cruising the canals.

Wouldn't change a thing.
Posted by Mark and Corinne at 09:19 No comments:

This mornings walk around Busters wood, we came across some Nice fungi. 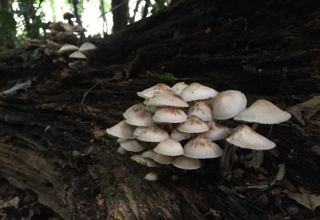 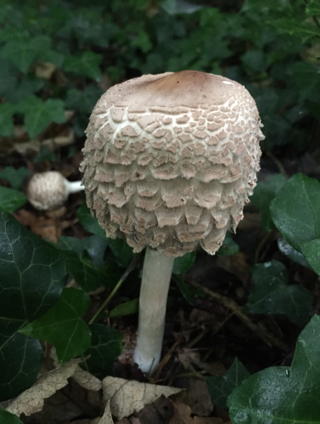 Posted by Mark and Corinne at 09:56 No comments:

This is a trip we had been planning for years a fly drive holiday, picking up a car in LA and driving to all the attractions we wanted to see.

From LA to Palm Springs, temperature was hot and the air conditioning took a hammering. We found the hotel and went off to find the Aerial Tram high into the mountains with a wonderful view over Palm Springs. Lots of nice restaurants and ice-cream parlours.

Mark has always wanted to travel the full length of route 66 on a Greyhound bus, this is the second best thing passing along it at Kingman for a few miles. There isn't actually much of the original IS66 left.
Hoover Dam, had to be on the list of places to visit, if only to say we have been there.
The Grand Canyon, you just can't help but say wow when you first lay your eyes on it, we wanted to do a mule trail into the canyon but unfortunately time was against us. The free tour buses along the rim are great.
We did struggle to find proper food, a person can only take so many burgers, pizzas, Subways, truck stop snacks. We found ourselves spending most of our time in Starbucks, free wifi. Our favourite stopping place was Walmart, every kind of food going.
Death Valley was an experience the heat was almost unbearable with a breeze it was like sitting in front of an electric heater on full bars, it burned your eyeballs. Dust storms looked good just like the westerns. We found ourselves taking photos of roads the expanse just can't be captured in a photo.
This was a strange one, hundreds of miles from anywhere and not a car in sight we found a stop sign, obviously we obeyed the law and stopped even if it was to take a photo.
This was when the penny dropped. For hundreds of miles we had been seeing signs with PED XING on them, and we couldn't figure what the hell they meant until we saw this, apparently americans use text talk on their road signs. Pedestrians Crossing.  This sign obviously means Burros Crossing but again you could see for what seemed like hundreds of miles with nothing in sight.
Las Vegas was great  Corinne liked it more then me, the hotels were out of this world, and we manage to get tickets to see Britney Spears at the Planet Hollywood. Fremont Street was good with the biggest led screen in the world. It's definitely worth taking a tour bus around at night. Night time being better than the day.
Yosemite was Marks favourite place on this trip, and would love to go back and do some walking, the sights are fantastic, unfortunately we didn't see any bears. Mark wanted to see the giant trees at Sequoia but again we didn't have enough time.
San Francisco, Mark wasn't impressed. He got a cold for one, and apart from Fishermans Wharf which was very touristy there was only Alcatraz and Golden Gate Bridge worth seeing.
The coast south of Carmel was lovely and we actually saw a whale in the sea.
Ventura Beach was nice, the hotel overlooked a train crossing with bells and flashing lights, maybe its our weird sense of humour but we laughed every time a train went past, probably the other guests were down at reception demanding another room. Trains stopped running at 20.00hrs. There was a good restaurant opposite that served proper food, food portions over here are ridiculous Corinne ordered fish and chips and got three fish with a potion of chips.
Los Angeles was our last destination, Again a bit of a disappointment Fairfax was nice but Hollywood was a letdown. At least we can say we've been.
All in all, a great trip even though tiring, would recommend to anyone.