Its always been a bit of a hit and miss whether we got a decent signal from our satellite receiver so we've invested in a digital aerial from Maplin. A Moonraker pro lite, £44.99. Last weekend we installed it in the cratch on a trial run, it received a load of channels straight away. Its only been used in the marina but I've no reason to doubt it performing any different wherever we go. 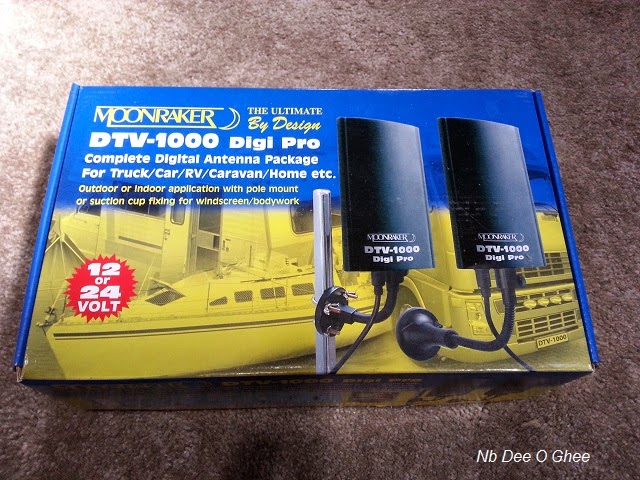 Diaries of our latest trip to and from Manchester.

We set off for Dee O Ghee after work, the journey that usually takes fifty minutes this evening took us an extra hour due to delays on the M6 and M56. Finally arrived at the marina, quickly doing checks and switching everything on for the short one hour trip to get us a head start in the morning, we cast off around 7pm and moored up at Beeston just after the Shady Oak Pub for the night, timing couldn't have been any better as it just started to rain very heavily as we got inside.

Out with Charlie this morning at 8.30am, before heading back for breakfast and a sit down before setting off.
Made good progress today even though it was only us going through the double locks in our direction. Anglo Welsh taking up the whole canal again at Bunbury wharf, right up to the lock gates also lots of diesel in the water. Two CRT lock keepers helping boaters through the staircase and one paddle not working making through passage very slow. Rain started just before Barbridge junction and didn't stop, called it a day just passed Church Minshull and moored for the night at 2 pm.
Fed the swans after we'd packed away, when the bread ran out they decided to terrorise Charlie.
Friends on narrowboat Niamh moored up unexpectedly in front of us this afternoon, they invited us on board for drinks and a catch up on what's been happening. Lovely to see them again.
The Church Minshull 48 hour moorings are on our list of favourite stopping places. 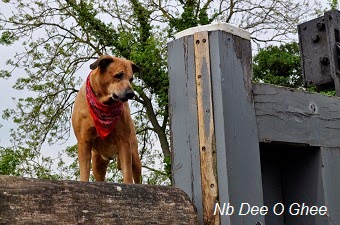 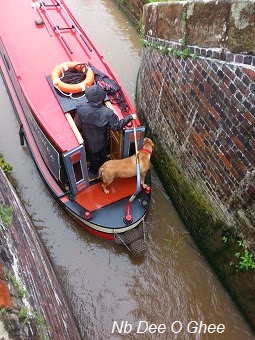 Left our mooring at Church Minshull around 9am, heading for Middlewich. Wardle lock was very slow with paddles not working at their best and fairly busy too. Moored near Anderson boat hire for lunch and to pick up some supplies from Tesco direct, came away without very much, limited stocks here. Lets hope Sainsburys at Lymn have more choice. Started raining during lunch but stopped before we set off again.

Passed nb Yarwood moored up at the Billinge flash beeped our horn and got a wave from Lesley.
Got stuck behind a hire boat at Broken Cross all the way nearly into Anderton, they seem to find it impossible to keep on a straight course, finally got passed them when they ran aground. Made it to Anderton after eight and half hours cruising, filled up with water, emptied the elsan and got rid of the rubbish. Planned to moor just before the boat lift but everything was full so just managed to squeeze on the last mooring beyond lift. 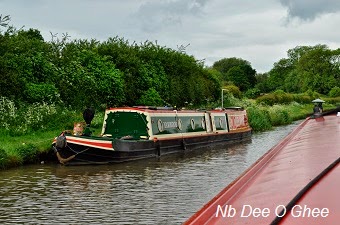 The sunshine brought everyone out nice and early today, us being no exception. Setting off around eight thirty, finally T shirt weather had arrived. A bit of excitement not far into our cruise when a boat in front of us ran aground and blocked the canal, took two of the boats in front and some walkers to pull them free. We did three tunnels today, just missing the permitted passage times for Preston Brook and a thirty minute wait, so we had some lunch and sat out in the sunshine. The second to last boat coming the other way through the tunnel was blogger Nb Seyella, a quick hello as they passed by in a convoy of boats.
We stopped a Midland Chandlers for some coal and some new Canal Companion Guides as the ones we have are getting quite worn and falling apart.
Met up with Emily and Adam, daughter and her partner at Stockton Heath, they joined us on board into Lymm, we stayed a few hours had dinner picked up some shopping from Sainsburys. Had decided because of the lovely weather we would move a bit further, finally stopping at Dunham.﻿﻿﻿
﻿
﻿
﻿ 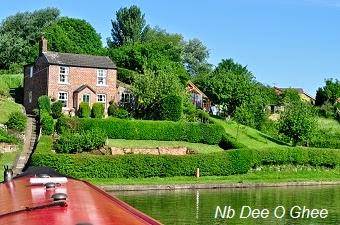 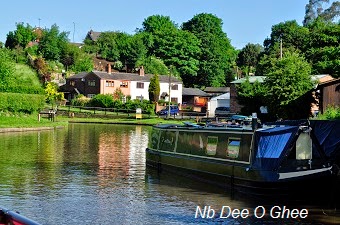 Left Dunham at 9.20am for a steady trip into Manchester's Castlefields. Weather was overcast and threatened to rain but held off. Passed (Twitter follower) Skylark as they headed the opposite direction near Sale. Our approach through Stretford into Manchester was like graffiti city most of it in some unreadable Eastern European language or something similar, looked awful, don't remember it looking this bad when we did the same trip in 2009. Castlefield was as we expected, busy. Managed to find a spot right at the end of the arm and had moored up by 13.15.
Took a walk around the wharf in the afternoon and got some photos, we don't seem to have taken as many photos on this trip so far.
Out again in the evening for a stroll, needed to find a Sainsbury's and use some of the Nectar points we'd been collecting on a coffee machine for the boat, lots of local outlets but they don't stock coffee makers.
Back on board and the TV satellite wasn't picking up much, the only signal was for Britain's Got Talent so opted to watch three episodes of Auf Wiedersehen Pet on dvd.
The evening was nice out so I took some day and night photos of Dee O Ghee. 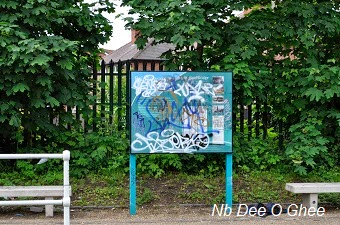 Woke to rain this morning, finally got around to getting up at 8.30, Charlie refused to go out in the rain for his toilet. Had breakfast by 9.00, the rain had stopped so we set off for an explore around Manchester. Started raining again so called in to Java bar on Oxford Road for a coffee and sit down under their canopy outside with Charlie watching people pass by in the rain. When the rain stopped we finished our coffee's and headed off to look for Chinatown, we wanted a photo of the Chinese arch, just my luck it was completely covered with sheeting for renovation work. Not had a meal in Chinatown for years so next time we visit we shall definately be coming here for a meal.
Headed back to the boat via Portland Street and Gmex to the basin, arrived back just before twelve, sat down for a while before setting off on the return journey. Stopped just past Potato wharf and emptied the elsan.
Started to rain as we were casting off but soon stopped, we had a rain free trip for the rest of the day. Stopped for diesel at Stretford Marina £0.87 per litre. Made Dunham Massey early so decided a Chinese takeaway was more important than an early stop, continued on into Lymm, very busy again and had to moor south of the village.
Weather waited until we had packed away before rain set in again, lit the stove as it was beginning to feel a bit chilly, phoned the takeaway order through and left ten minutes later to pick it up. Meal was good but we went way over the top with quantity as usual.

Out with Charlie at 8.30 for his walk. Ground was wet so must have rained last night, no rain this morning so far.
Watched the market stall holders setting up for the day, didn't go back to have a look around.
Just as we we're ready to cast of two other boats came around the corner and one in front of the next boat to us set off in a hurry to be in front causing everyone in line to stop, the boat that rushed to get off before everyone else was so slow and it was Stockton Heath when they finally pulled over to let everyone by.
Another good run today. Just made the entry times for Preston Brook, three tunnels done today, Barnton was very fumey but a lot less boats out and about.
Didn't rain again but did feel cold.
Fewer boats moored at Anderton so managed to get in just after the lift. Walked down to the river Weaver with Charlie to see the lift from that angle 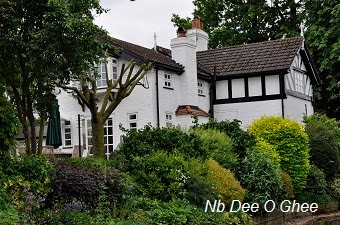 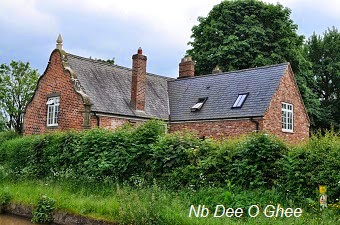 Up early again today and we were ready to set off at 9.30am. Called in at Anderton services to fill up with water, empty the elsan and rubbish. Saw our first Kingfisher of the year at Croxton on the way to Middlewich, shopping once again at Tesco, we cut a piece of rubber matting for the sliding hatch to place drinks on when travelling. The locks at Middlewich were busy and it took a long time to get through, we wanted to make Church Minshull so kept going till 5.40pm. Another dry day. Stove on again tonight, toasty!

Went to bed early last night a had a good sleep for a change. Up this morning woken by passing boats. Did the usual, breakfast, walk Charlie. Cast off at 9.00. Today looks like it may turn out nice. Stopped off at Venetian Marina for diesel £0.89 a litre, slightly dearer. Spotted a lovely bright yellow wagtail at venetian locks sat on the lock mechanism right behind me, did a runner when the camera came out. Reached Barbridge Junction by 11.00. Paired up with another boat to do the double locks towards Chester, very little delay today hardly any hire boaters about. Reached our marina at 15.00. Nearly made the marina turn without touching the sides. Moored at the pontoon perfectly but as usual no one was about to see that! Tattenhall has the cheapest place for diesel at £0.85.