Wishing you all a Very Merry Christmas and a Happy New Year.

Hope to meet some of you next year on our travels.
Posted by Mark and Corinne at 19:03 No comments:

Volume two of the blog...

We have just received volume two and final copy of our fit-out blog in print, this now takes us up to the launch date. blog2print.
﻿

On the move again...

It was time for us to be on the move again this weekend, we hadn't brought Charlie with us on this trip only because a taxi dropped us at the marina. Leaving Swanley and heading towards Tattenhall we hadn't been in any rush to set off this morning and didn't arrive at Dee O Ghee till eleven in the morning. It was one o'clock before we finally left the marina with a nice blue sky.
Not far from the marina you can just about catch a glimpse of the head of a Dalek over the hill from the canal, we'd driven past this a few times in the car but never had the camera handy.
As you would expect it was very quiet apart from a couple a boats passing us while we were going down Hurleston locks. When we reached Barbridge it was straight on for us, this is the first time down this stretch of canal usually we turn right towards Middlewich.
Setting off late meant we only had about two and half maybe three hour cruising before finding somewhere to moor up before it went too dark. Luck should have it that just after bridge ** at Calveley a nice stretch of towpath appeared with a background of red sky.
We packed up for the night and settled down in front of the stove for a warm and a hot drink before setting out to find somewhere to eat.
Heading into the village we came across what looked like the first and only pub, Davenports. It had closed down. just as we were about to give up and go back to the boat a signal on the phone was found, there was another pub just under a mile away, it was very dark by now. We decided to walk in its direction it didn't take long and we could see the lights ahead, it turned out to be a lovely pub called the Tollemache Arms, the food was great and all the staff made us welcome.
Next morning we had another late start, today the weather wasn't so nice with a bit of drizzle in the air but it was bearable. The first lock we came to was a double, as we were filling it another boat came along just in time to share it with us, it was a couple from New Zealand finishing their holiday, we ended up doing the rest of the double locks with them until they reached their destination, that only left us with a couple more on our own to do. 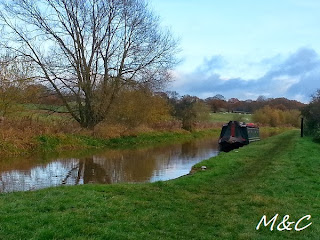 Posted by Mark and Corinne at 22:01 No comments: