We have kept the name very hush hush! just in case it changed, but saying that we've had Dee O Ghee pretty much decided on for at least a year now.

Why Dee O Ghee. Well we wanted a name that was unique and we think we may have managed that, we both love dogs but naming it after Charlie sounded like it had probably been used countless times before. Dee O Ghee came from when we used to tried to fool Charlie, If we mentioned the word dog he would jump up and either think it was time for his walk or one of his four legged friends was walking down the street, we then tried spelling it out like dee o ghee not (gee), it didn't take him long to catch on but we stuck with spelling it out. As a joke one of us said why not call the boat Dee O Ghee and that we did. 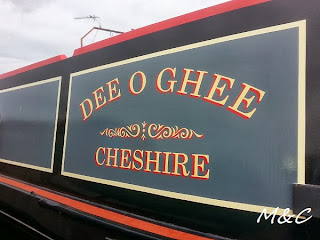